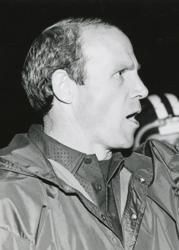 Prior to becoming Anoka High School’s head football coach in 1979, DeWayne Johnson had established himself as one of the premier high school coaches in Wisconsin, where he won several conference championships and two state titles.  A star athlete himself, DeWayne lettered in football, basketball, baseball, and track in high school and later earned hall of fame recognition for his football and baseball accomplishments at the University of Wisconsin, River Falls, as he earned his degree in math and business education.

DeWayne became a math teacher at Anoka High School and took over the successful football program upon the retirement of Stan Nelson.  Coach Johnson instituted several practices that became staples of the Tornado football program, a player-parent mixer on the first day of fall camp; a team pig roast; a spaghetti dinner the day before a game and a team party following the game; and the annual community clean-up day, during which players volunteer for various tasks to improve the local community.

Coach Johnson made a major impact on his players.  One athlete Andrew Heidemann who now coaches at Anoka remembers, "When I was a lost 8th grader looking for something to belong too I received a letter from Coach Johnson encouraging me to join the football team. I had taken two years off during middle school and really didn't have anything to be a part of. I then joined football eventually leading to me loving the game and continuing to encourage kids to play so that I can help someone like helped me"

Coach Johnson was fortunate to have coached his two sons Brent and Bart, two outstanding athletes in their own right, and he credits his wife Sharon for many years of enthusiastic support to him, their sons, and to the entire Anoka football family.